If you have documentation for any sort of HTTP-based API, from a micro-service to a non-trivial RESTful API, if it has existed for more than a week it has got some mistakes in it. Documentation degrades over time. This article aims to help you ensure that your API documentation keeps entirely in line with the implementation, utilizing two tools: API Blueprint and Dredd.

If you are not familiar with API Blueprint, maybe you know of Apiary. API Blueprint is the Markdown-based format used by Apiary to create their API documentation - along with other various features. Dredd is a tool that will check for discrepancies between your documentation and the actual implementation.

Documentation errors could be a new field added or removed from the API request or response, but not reflected in the documentation. Using serializers such as Fractal (PHP), Active Model Serializers (Rails) or Marshmallow (Python) can help you notice field changes, but there are many more areas to think about. Maybe a new query string has been added which was not listed, or a new JSON-API style link (relationship) is being presented that was not available before. What about response headers? So many things can change.

To make sure API documentation is 100% matching the implementation at Ride, and to avoid a number of angry Colombians kicking my ass next time they’re in up in NYC on a team building trip, I have spent quite some time implementing Dredd.

My previous explanation of Dredd might sound a bit magic. To me at first this is exactly how it sounded, but really it is so simple. Dredd is just a CLI NodeJS application which looks at every Request and Response documented in your API Blueprint file and treats it like an integration test. The API Blueprint file is put into the git repo by Apiary by messing about with the settings, meaning it can be updated in pull requests along with the code that is being changed, which makes CI integration much easier.

Dredd will look at the headers, status code, response format and the exact body returned, and let you know if there are differences in any of those areas. An error message will be output, meaning you can debug an application locally or dispense quick and brutal justice on your continuous integration build.

Setting this up took me about three weeks, but we have an incredibly non-trivial API at Ride. There are complex user roles, we are pre-1.0 meaning there were a lot of bugs to fix and are in a rapid development phase meaning I was coding against moving goal posts. 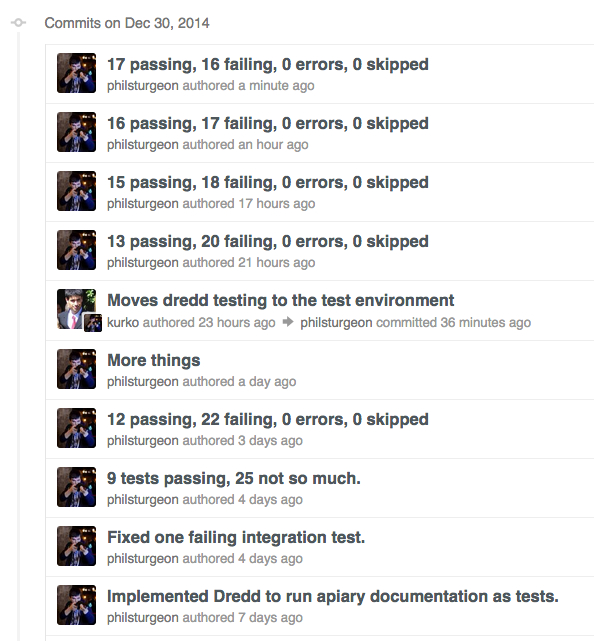 You can do this much quicker.

First, read How To Test REST API with API Blueprint and Dredd.

Next, I’ll outline everything I had to consider and implement to make this work which is not listed there at all.

In the Apiary article they have an example scripts/test file:

I tweaked that and made a bin/run_dredd script to fit in with the other Rails executables:

This helped make dredd set itself up with a useful database, run a server in the test environment, look at the apiary.apib file then kill its process. A very handy script.

I wrote about seeding a database in PHP/Laravel and there are a few new tools like Factory Muffin to make this really easy. Regardless of the language or framework, however you seed your database for other integration tests will probably work fairly well as a start.

At Ride as you can see above we use Rails fixtures for tests already, so I got a long way off of that. I ended up writing a custom db:seed logic which would make custom users, custom OAuth tokens, and basic related data to be used solely by Dredd.

When I first started with Dredd I was trying to send it the same access token for everything using dredd apiary.apib --header FOO-TOKEN, forgetting that various endpoints expect tokens to belong to either users, or one of a few different OAuth clients that represent internal services.

Our API would complain that the token was not for a user, or was not for that specific service.

To make this work, I added some different users, who all had their own access token:

We also have driver_access_token and foo_service_access_token. This can be a bit misleading as it looks like we are saying only users on an endpoint that might allow users and services, but that can be explained for humans in the description.

Some integration test frameworks will let you insert fixtures into the database before each test, then reset the database to its previous condition via transactions or whatever afterwards to ensure a fresh state for each test. Dredd will not make your life that easy. It will continue to have knock-on effects on other endpoints in whatever order it runs in.

Using the dredd --sorted switch will very likely reduce the number of resources that try to delete content before reading it. The tests will be run in this order: CONNECT, OPTIONS, POST, GET, HEAD, PUT, PATCH, DELETE, TRACE. This is probably not a magic bullet, but it reduced my errors by about 30%.

To combat the other 70% I experimented with writing hooks for Dredd, which are a way you can use CoffeeScript - uck - to run NodeJS script - uck - before and after various tests. I found some examples to run code before every test, so I wondered if I could hook up a db:reset and a db:seed before each Dredd test.

I knew this would be slow if it worked, but it ended up running the child processes async meaning the seeds would not finish before it tried to run the test. After a few hours of messing around I dropped this approach, instead aiming to focus on compartmentalizing the users so their actions would have no affect on each other.

Following the approach in Step 3, I just made a billy_no_mates_access_token which had no matched users, meaning I could add and change addresses without deleting any other data.

CircleCI was perfectly happy to run Dredd with minimal cocking around:

I had to override the default command to allow multiple commands, and obviously dredd had to be installed via npm, but after that it just used the same ./bin/run_dredd I’d been using locally.

JSON syntax errors in examples, Markdown syntax errors and other problems can really mess you up, and Dredd is not always that hot at reporting them. There is another tool called Snowcrash, which you can use directly once installed. If anything goes weird in your tests, try this command:

This gives some great feedback on all sorts of potential screw-ups in your documentation, which otherwise might go unreported.

If you have no integration tests then this can be a good start, but it should not be relied on as your complete test-suite. There are a few reasons, but in part it comes down to API Blueprint; it is great, but it has limitations.

For example, you can only have one request for each “URL” + “HTTP Method” combination. This has been a pain in the past when I have wanted to document multiple POST /oauth/tokens requests showing the various inputs and outputs for different OAuth grant types, but API Blueprint wouldn’t let me.

This makes Dredd terrible for proper integration testing, and that is fine as it is not what Dredd is for. Dredd is testing your documentation is accurate using the API, it is not for testing your API. That is just a handy side benefit. Dredd has caught actual bugs that our unit and integration tests did not, but again, you can’t just use Dredd. You need a real test suite too.

Getting Dredd setup can be rather hard work depending on the size of your HTTP API, but it is very much worth it. It has helped me avoid a kicking from the API clients once or twice, and no doubt it will help more in the future. That said, I would have preferred to spend three weeks working on features instead of trying to crowbar this into our workflow.

Hopefully you can get it done a little quicker with this advice.

Some people like to take a quick walk down memory lane in January, and post their highlights of the previous year. Last year (2014) was…

Dear PHP Community: These are the folks behind The League of Extraordinary Packages, who you should know, but maybe do not.