I’ve been working at Ride.com since October 2014, and I’ve got to do some awesome stuff with them. As far as my job has been concerned, the first 4-5 months were entirely green field development. As a team we built multiple services to compliment a central API, and with the help of some other gophers at the company I built most of a little Go service to handle various autocomplete requirements.

One of the autocomplete endpoints was for addresses, allowing us to switch map API providers without totally breaking our iOS and web apps.

I had a few clashes with the Google Maps API along the way. Some were my fault, some were their fault, and some I just blame on imperfections in U.S. address system. To be fair, the U.K. is not much better, but the U.S had a more recent opportunity to get things a bit better and they still fucked it.

I pretty much want to get this for homes and places of work:

A feature the web/iOS clients and business all requested rather early on was location-based biasing. This is the art of assuming that things near you are more relevant than things far away, which is pretty fair. Somebody in Florida probably doesn’t drive to work in Texas, and definitely doesn’t need to see shit in Alaska.

If we were using the Google Places API then we’d be golden because you can just give them a ?near=lat,lng and they’ll work it out for you. Sadly, the Google Places API is not useful for us. Many work places outside of major companies are not on the places API, and obviously not many people have their homes in that API either.

We had to stick with the Google Maps API and that does not have the same functionality. Balls. Time for a dumb hack:

This has worked well enough that most people seem happy with it. It makes a rather wide box which is big enough to contain a large US city and some surrounding suburbs.

If the coordinates Google has for the address are considered to be a hair over the line of that bounding box then the address might as well be a on the other side of the country for all it cares.

When doing research on some big corporate buildings we’d likely have people wanting to drive to, some folks at Ride spotted a problem, with a company who’s name I am pretending is “Imagination”. 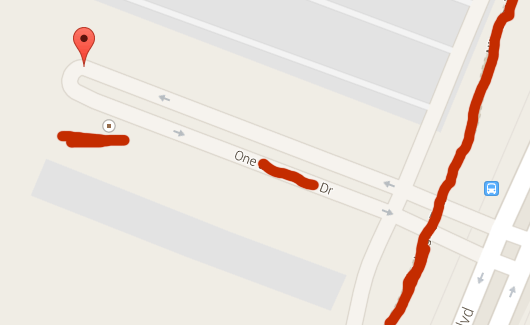 Think about it, having a road instead of an actual address could be madness for calculating how far people need to drive, and would throw off our pricing calculations.

To offer an extreme example, if you as a driver enter “Route 66” as a destination, if you stop short of wherever Google places the pin then you are going to be drastically overcharging any passengers, and the opposite problem occurs if you drive past the pin: you’ll be losing money. Our petrol costs based on milage would be screwed, even if only by a fraction in real-world usage.

As with many things in programming, we are faced with various shit options. I presenting the shit options to business:

Google returns components with a types array, which can have a plethora of values.

For a while I didn’t actually know about this type array, and was foolishly throwing away results that did not have a street_address or a route. This kicked me in the face when we realised that the Bank of America Plaza in Atlanta does not actually have a street address or route at all. 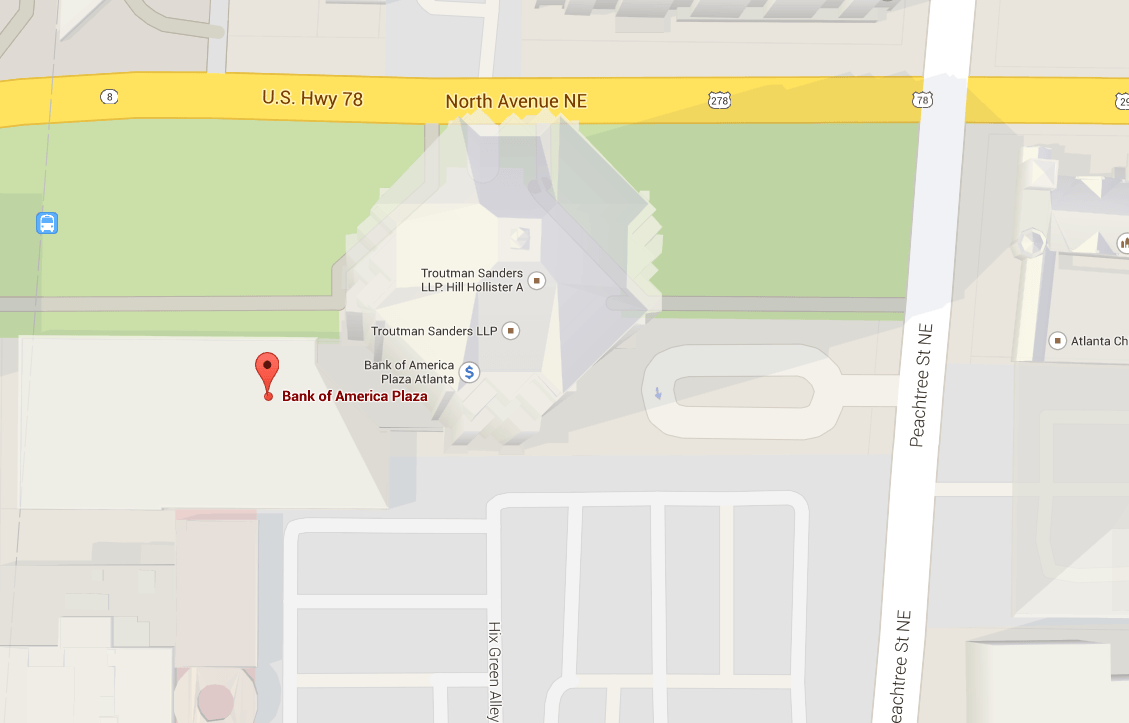 Looking at the building on the map you can see it has a road, but that little road has no name. It is not considered to be on Peachtree St NE, nor is it on U.S. Highway 78, it is just on bloody nothing.

If I were to remove the check that said “no street address or route = invalid address”, the code would not only allow Bank of America Plaza Atlanta, but it would also let any town or city into the results, meaning you could easily say your pickup or destination address was West Chester, NY, leaving the driver to do laps around a town of a few thousand trying to find you…

Google has us covered here. Allow any of the following component types:

If you can think of any more then please send answers on the back of a postcard.

Some companies are against that for security reasons, but we have a switch to turn it on or off for various companies.

Anyway, we allow a radius of 50 meters for now, and yes, looking at the image below that is a “square radius”. Shut up, I didn’t want to get PostGIS involved and slow down this query for a temporary feature as the geo search is being moved out of the API anyway.

See if you can spot what is happening in this image. 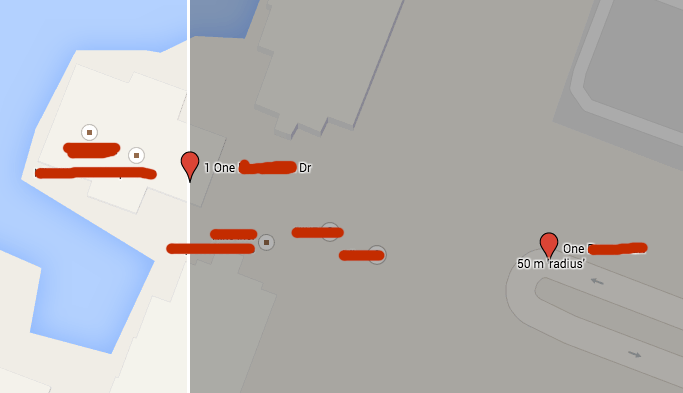 I can’t remember exactly what happened, but I have a sneaking suspicion we bumped our “square-radius” to 52 meters and called it a day.

You couldn’t write this stuff.

One of the most important parts of building any sort of HTTP API is to serialize data before you output it, and hardly anyone does it.

Back in 2013 I did a three-day ride from Boston to New York, along with hundreds of amazing people. Everyone was in various levels of…