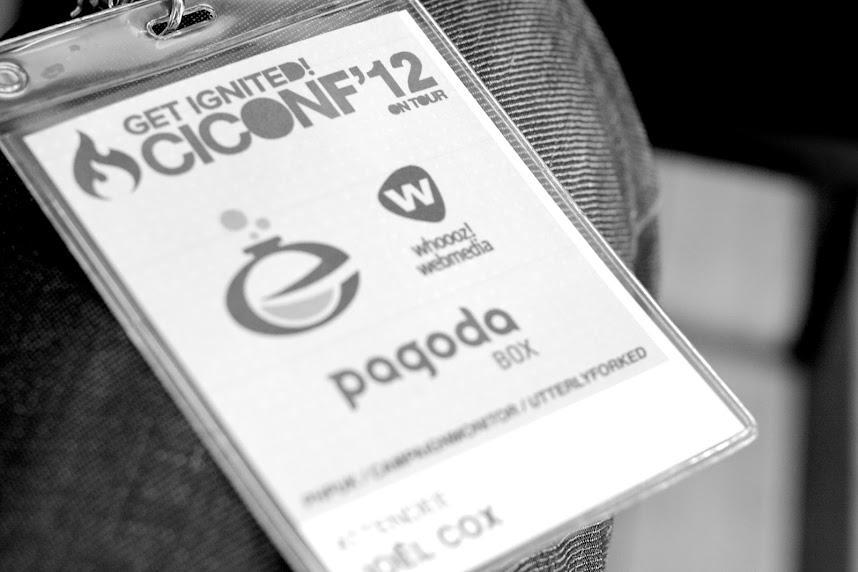 It’s been a few days since CICONF and this is my first chance to get my thoughts together after a few busy days. In all I am extremely pleased with the event, and so far I have seen nothing but positive feedback on the #ciconf hash-tag and not heard any complaints. Winner!

The first thing to point out is that this is only the third event I have had a hand in organising. The first was an assisting role in getting CICON2010 going but that was a terrible event.

My second event was CICON2011 in New York, which was much much much better thanks to a great team: Adam Fairholm and Kenny Katzguru. These guys were relatively local and had great knowledge of the area. That combined with a wicked venue at New Work City made for a fun time for all. We learned a lot and those lessons helped me make CICONF UK 2012 even better!

This was pretty stressful, as we had 90ish attendees for the weekend but barely anyone showed up on time for the evening. Apparently this is pretty standard, but there was about 10 of us all drinking and chatting away until about 9. Suddenly things picked up with a stream of geeks joining us getting our numbers up to 30. This was enough to make the venue happy - especially with the Geordies raising our bar spend, but I still haven’t heard back about my deposit. Meh.

We had a few initial hiccups but things got going eventually. The trouble started when we got to the venue an hour before we were expecting people only to find the front door locked. After arguing with a Polish cleaner for a bit we eventually got in, but lost a lot of set-up time. That meant when everyone was arriving I was still trying to sort out all their lanyards. Great!

Things got started and the speakers were spot on. Pascal chatted about paper, John told us gave us an introduction to PHPUnit and Nick gave people some ideas about how to make their API first and the application come second, instead of just using it as a marketing ploy. These were great talks but ran a little quick, so I pulled out my backup speaker: Mark Ryan!

Mark is a good friend from the ignite100 start-up incubator who runs a newly funded start-up called Blooie. Thankfully people got why I wanted him to speak. His talk was essentially explaining to people how you can get from an idea to funding if you take on board a little help. Ignite100 is epic. Go do it.

Bastards. I was so annoyed about this situation but it was truly my own fault for not knowing what questions to ask a venue. Now I do, but…

We had planned to bring in a boat-load of pizza after getting the costs covered with some sponsorship from CampaignMonitor (lovely guys) and Sunday was going to be Subway platters all round, but the venue told me on about Tuesday that we were not allowed to bring in food and we had to use their own chef.

Erf. The costs involved with getting a cup of tea in that place were pretty ridiculous, but having everyone fed and watered ended up costing 7 times what it should and the food was pretty pathetic. It stressed me out so much I started feeling sick. YAY EVENTS!

Sorry guys, I have really learned a lesson on that one.

We came back from lunch to an amazing talk. Tyler Flint is truly a brilliant speaker, who gave a very technical talk without trying to pimp his product - which as a sponsor he had every right to do. Pagoda Box is a service that has changed how I host sites forever and he explained how they ended up coming about, what problems they are here to fix, then in the end gave every CICONF attendee a special treat: we all had discount codes on our lanyard and that gave us special access to stuff that the rest of you wont get for a while. Ha. You should have come.

After that we had some great talks by Harro Verton about ORMs which went down fairly well, but judging from a few tweets going around not everyone was convinced. Really guys, read Misconceptions about ORMs, it might help you see a different side.

Then we finished up with “the boy wonder” Jamie Rumbelow who was showing off some Rails-like conventions in CodeIgniter.

Epic! I wanted to do something a little different from the usual “stand around and talk about code” and Shealan Forshaw suggested a pretty quirky bowling alley. Live Jazz (ok nobody liked that), pizzas the size of drain covers, great beers and in all it was an awesome night.

We started at 10am to give those with hangovers a fighting chance. That turned out to be a lot of them, but for once I wasn’t amongst them.

The first talk was from Alexis Serneels about why he loves CodeIgniter and went on to explain how by spending a little time making a CMF that makes sense to you, you can build out client projects in next to not time.

Alex Bilbie gave an amazing overview of MongoDB in general, correct use-cases, debunked a few myths and his detailed explanations even converted a few “MySQL or die” types to give it a try. I’ve seen people bang on about MongoDB for an hour before and I think last time it happened I fell asleep. This was very different.

My “master-class” was up next. I decided to walk people through “an hour in the life of Phil” and show how I use Git, Git Flow, PyroCMS and Pagoda Box to knock out sites. I’ll admit I could have prepared better and the live coding was - as it always is - a little shaky, but planning a conference AND a talk is a bit much, especially while spending most of the month before it in Canada or freelancing like a maniac to avoid going broke after a long holiday. Ahh well, another lesson learned. I think people got something from it at least :)

Finally to finish up we had more from Harro going more in depth about his own ORM showing off how a lot of it worked. I’ve used ORMs in Rails and FuelPHP but never really bothered in CodeIgniter, but after watching him go through things and show off some of the code I really do feel like my next project will be using DataMapper. Validation in the model is currently possible in CodeIgniter, but it’s a bit shaky. DataMapper - even if it did nothing else - makes that very easy indeed.

I wanted to avoid organising anything official in the evening as I expected most to be going home. In the end I pointed out a pub on a map and said “I’ll be there, and I know the Geordies will be too.” Having this casual drinking option was perfect and we had a pretty good turnout - better than the Friday night - but I didn’t have the stress of it being “official” so I could finally get stuck into some pints.

It was a really really good weekend. I am genuinely sad that I got to meet so many great people from the community that I know I won’t see again for a long time. The PHPNE team were supportive the whole time and did a great job of keeping beers in my hand - but I get to see them again next PHPNE as that is my new local community. Others I will not see until CICONF 2012 US in San Francisco this August, or maybe even later.

I learned a lot and feel like my next conferences will be even better. Right now I am not sure what my next UK conference will be. Instead of another CodeIgniter-centric conference I might do something a little different, which hopefully people will be excited about. I’ve mentioned my plans to a few and they’re looking forward to WhateverCon 2013.

Cloud hosting is nothing new. Seeing as "cloud" is such a loosely used term some will consider their VPS solutions on Slicehost or Rackspace to be "cloud hosting". Thats partially true, but this article covers how PHP is getting some serious attention in the PaaS (Platform as a Service) field. This year you will almost certainly find yourself making the decision whether or not to move some of your applications and services across to the cloud, and this article can hopefully help you work out why and how.

A package is a piece of reusable code that can be dropped into any application and be used without any tinkering to add functionality to that code. You don't need to know what is happening inside, only what the API for the class(es) are so that you can archive your goal. This is how most modern programming languages work, but to make a generalisation: PHP developers hate packages. Why?